Madison Square in Savannah is Haunted

Madison Square, on Bull Street, looks just like any other square in Savannah, however this one…..feels different.

You may catch a glimpse of a shadow out of the corner of your eye or feel a presence staring at you from the empty windows of the grand homes lining the streets. Perhaps a chill will suddenly pass by on an otherwise hot night and you hear a whisper from some long-gone soul begging you to listen to their story.

The Square itself was laid out in 1837 and named for President James Madison. But before there was a square, before the imposing homes and church had built there, there were reports of Madison Square being haunted.

Some have reported seeing strange human-shaped shadows skulking across the grounds, balls of light flitting through the trees, and strange flashes resembling lightning when there are no storms.

In 1779, a year after the city of Savannah had been captured by the British under  Lieutenant-Colonel Archibald Campbell, there was an attempt to retake Savannah during a battle that lasted from September 16th to October 18th.

There was an attempt to attack the British siege works on October 9th that failed which left Count Casimir Pulaski, who was leading the cavalry forces on the American side, mortally wounded.

After the failed attack, the siege was abandoned and the Americans couldn’t gain a foothold again. This left Savannah under British control until 1782.

Sergeant William Jasper, one of the heroes during the Battle of Savannah is immortalized in the center of Madison Square with a statue. He had infiltrated the British lines by claiming to be a deserter to spy on them in Savannah. After eight days, he returned to the Patriot forces to inform them of the British positions. During the siege, he was mortally wounded while trying to raise the fallen Patriot flag. 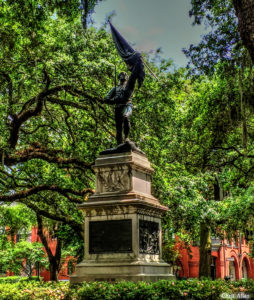 Many more soldiers fell in battle during that siege, which took place near Madison Square. There are rumors yet confirmed that Madison Square is the location of a mass grave for those fallen. With so many dead, and medical practices and tools not as advanced as it is today, it is said that more than a few may have been buried alive and thrown in with the corpses of their comrades in arms.

However, that wasn’t the only war to make its way to Savannah. In the 1860’s the American Civil War made its presence known and changed the face of the South forever.

Ghosts of the Green-Meldrim House 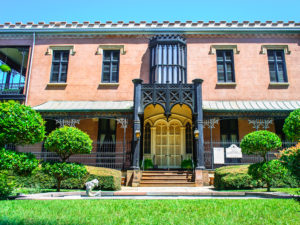 The Green-Meldrim house is a prime example of the Gothic-Revival style of Architecture. It was built and designed by John Norris in 1850 for a wealthy cotton merchant named Charles Green for $90,000.

On his March to the Sea, General William Tecumseh Sherman made this home his headquarters while the army occupied the city. It was from here that Sherman composed the famous letter to President Lincoln giving to him the entire city of Savannah as a Christmas gift.

The letter was later published in newspapers and it read:

“I beg to present you as a Christmas gift, the city of Savannah, with one hundred and fifty heavy guns and plenty of ammunition, and also about twenty-five thousand bales of cotton.” 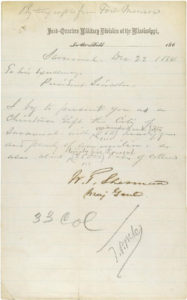 While in residence at the Green-Meldrim House, he would often complain about the Church bells ringing from the St. John’s Episcopal next door, so he ordered the bells to be removed and melted down into cannon balls. Arguments followed and ultimately, seven women of the congregation persuaded him to leave the bells alone.

In the church, there have been several reports from choir members who claim they feel as though someone is pushing them from behind as they sing. People have seen a rather awry woman in a large hat and victorian dress walking the building as well.

Even the church bells are not free from hauntings. The rector has claimed to have sensed and evil presence while checking on the bells from time to time. This feeling is usually followed by the sighting of a figure in a black dress, mysteriously guarding the bells.

After the war, the Green-Meldrim home was then purchased by Judge Peter Meldrim. Judge Meldrim was a confederate veteran, mayor of Savannah, senator, and lawyer. His family would regularly host musical evenings in the home and courtyard. During these concerts, the sound of the music would draw the attention of a black servant who enjoyed standing in the back doorway to listen to the sweet sounds, tapping his feet in time with the rhythm.

What seems strange about the Green-Meldrim House, is that the spirits that haunt the home are attracted to the music as well. Whenever there is live music being played here, the paranormal activity begins. From things such as strange footsteps being heard echoing through the halls to doors opening and closing by themselves, it seems the ghosts love a good concert.