Alright, boys and girls, it’s that time of year again. The time of year where we dress up in crazy costumes,
shriek at the top of our lungs, and reenact grisly murders… Oh! You thought I meant Halloween? I guess that works too, but I was actually referring to the Opera! Who doesn’t love watching sopranos die bloody deaths and baritones being dragged to hell? I know I certainly do! So, I figure, in honor of the
Halloween season, I’d give you a rundown of 10 of the SPOOKIEST Operas of all time. Disclaimer: this list is not all-inclusive since I could only pick 10. But, without further ado, in no particular order, here are some spooky operas. 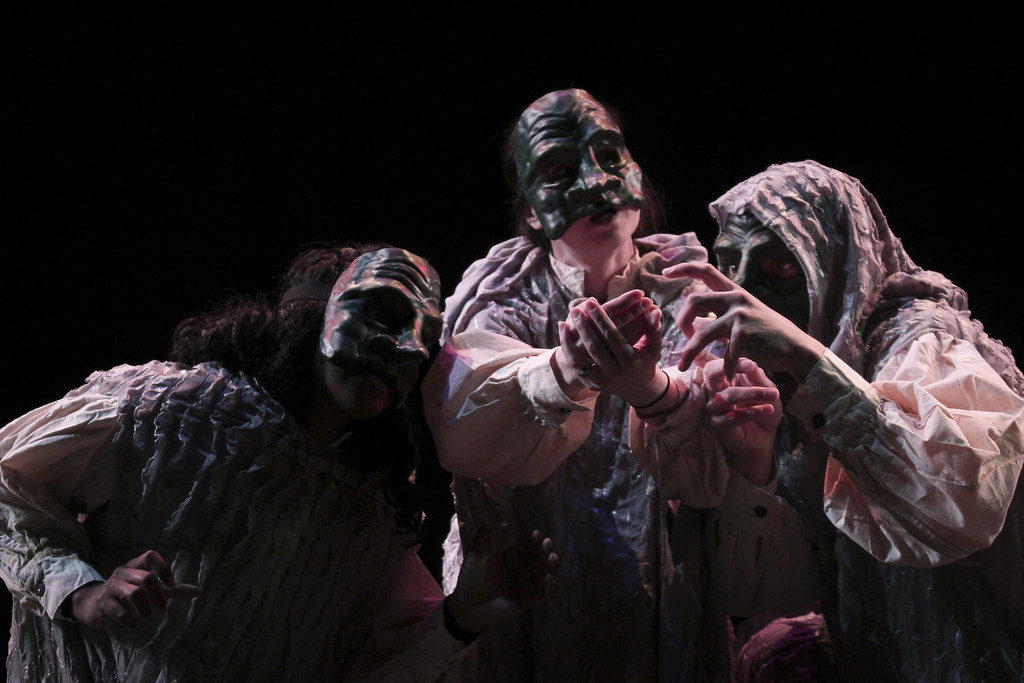 Now, this opera doesn’t have any supernatural elements or anything like that, but it does have one key element that makes it qualify for this list: clowns. The basic premise is that Canio, the head Pagliaccio (clown) of an acting troupe, finds out that his wife Nedda is having an affair. The big aria, “Vesti la giubba” always scared me because I had to watch the production where Pavarotti is smearing the white makeup over his face while wailing those high tenor notes. In the final act, Canio and Nedda are performing when Canio hears a line that reminds him of words that Nedda spoke to her lover. Forgetting himself, he demands to know her lover’s name and stabs her onstage. When her lover, Silvio, confronts him, Canio kills him as well. Murder and clowns. A true recipe for a spook.

This one is a little bit obvious, I’ll admit. Hamlet is visited by his father’s ghost and that, in and of itself gives it a spooky vibe. But there are other elements that I
believe merits it for this list. The largest, in my opinion, is the theme of madness that runs through the entire opera. Hamlet questions his own sanity on many occasions, as he does in the play. Also, Ophelia’s mad scene is one of those arias that any coloratura has on her bucket list.
There are actually two endings to the opera: the original ending actually has Hamlet live and the ghost of his father celebrating his defeat of the murderer, his uncle. The second is truncated and follows the Shakespeare play, where Hamlet dies. The only caveat is that the ghost does not appear in this shorter ending.

This one also is fairly straightforward. The witches’ chorus that opens the opera is very well known and this opera is done often. There is also the added spook factor that surrounds saying the name of the play (or opera) in a theater. So, an equal part of the mystique comes from offstage as well as on. Ask an opera singer who’s done the show, I’m sure that they will either have a.) an opinion on the “curse” or b.) an anecdote about their experience in the performance. I will share one that happens to come from my own mother. The second time she was in the chorus, the singer playing Macduff was supposed to stab Macbeth with a
retractable knife… only the knife didn’t retract. The singer playing Macbeth sang through to the end of the opera and was then rushed to the emergency room. Now, that’s what I call dedication!

This is another opera that doesn’t get its spook factor from the supernatural, for the most part. However, the main character is haunted in the sense that she feels the ghost of her own dread throughout the show. In the aria “Regnava nelsilencio”, Lucia talks about seeing the literal ghost of a girl that was killed by her lover, Edgardo’s, ancestor and is told by her maid that that is an omen to end her current relationship and just marry the man her family has chosen for her. Whether the ghost Lucia saw was real or imagined, its this sense of foreboding that follows her through many miscommunications that lead to her wedding to a man she doesn’t love. On her wedding night, she goes mad and murders her husband. The following mad scene, “Il dolce suono” is another coloratura dream scene. At the end of the opera, Edgardo, upon hearing about Lucia’s death kills himself and imagines seeing her in heaven. In most stagings, this involves a ghostly Lucia holding him in her arms. So, maybe the ghosts are real after all!

If the movie Amadeus is to be believed, Il Commendatore was the ghost of Mozart’s father, coming back to haunt him. But, whether that’s true or not, Il Comendatore is Donna Anna’s father and he’s out for the Don’s blood. The final dinner scene is one of those things that is recognizable from note one. That first “Don Giovanni…”, sung by a terrifying bass-baritone, is iconic. I’ll also never forget the staging I saw where the “demons” dragging the Don to hell were all the women he’d wronged, dressing in black unitards and hell was a vom that opened up onstage. I was 15 and I was hooked on opera from then on. The fact that you watch a man get dragged to hell for all his wrongs really makes you think twice the next time a moral dilemma comes up.

6.Turn of the Screw (Benjamin Britten):

This opera is based on the novella of the same name written by Henry James. The opera follows a Governess who moves into a mysterious house to look after two children, Miles and Flora. The Governess feels a strange connection to Miles but is wary about the house. At night, she hears footsteps and cries outside her door. She also sees the ghosts of the old governess and manservant. They are trying to possess the children and she does her best to keep the children safe. Miles, however, is swayed by the ghost of Peter Quint,
the manservant, and dies when the ghost is finally banished. This opera is another one that has a history of odd happenings offstage. When a former teacher of mine played Miss Jessel, one of the ghosts, she swore that props would move of their own accord and that there was a ghostly wailing that would fill the backstage late in the evenings.

Any opera with the devil is a good one for this list! And Faust really has
it all: witches, lust, murder, and a pact with Lucifer himself or, as the opera calls him,
Mephistopheles. The whole opera begins with an aging Faust determined to commit suicide by poison. That’s when Mephistopheles finds him and stops him with the promise of the young woman Marguerite. The deal they make condemns Faust’s eternal soul to hell but retrieves his youth so that he may pursue his love. He eventually impregnates and leaves Marguerite and her brother swears vengeance on him. When Faust finally faces him, Mephistopheles blocks all of
Marguerite’s brother’s blows and Faust kills him. Marguerite is sentenced to death for killing her child and cursed to hell but she is saved at the last moment and is able to go to heaven after all.
Mephistopheles is defeated and turned away by an archangel. Just goes to show, even the darkest of operas can have a happy ending.

The opera itself isn’t spooky per se, but the Wolf’s Glen scene is often dark and gruesome in nature. The scene takes place when Kaspar, a young man
who has made a deal with the devil (a common theme in opera, who knew?), summons Samiel,
the Black Huntsman, to cast magic bullets to give to Max to win a marksmanship competition in order to win Max’s beloved, Agathe’s, hand in marriage. Kaspar helps Max in order to trade in
Max’s soul and give himself another three years of grace on earth. The Huntsman casts seven bullets, the last of which will be controlled by him. Max is none the wiser and Kaspar tricks him so that the bullet Max fires in competition is the last. Samiel makes the bullet hit Agathe but she is unharmed due to her bridal wreath deflecting it. The bullet instead hits Kaspar who dies and goes to hell anyway. So, the lesson here? Cheaters never prosper!

Bring out your Sunday school lessons because we’re going biblical!
Sort of, at least. The premise of the opera is following the story of Herod beheading John the
Baptist. But this is another opera that has it all, including lust and murder. Salome lusts after
John, who rejects her. Herod lusts after Salome, his daughter. And Herodias, Herod’s wife, just wants to see John dead. So to, pardon my pun, kill two birds with one stone, Salome dances the
Dance of the Seven Veils until she is naked at her father’s feet demanding the head of John the
Baptist. When John’s severed head is brought to her, Salome declares her love and begins to kiss and dance with it, much to the disgust of everyone around her. The opera ends with Salome being killed by her father’s soldiers. A tiny bit more graphic than Sunday school.

Last, but certainly not least, this one-hour opera packs a lot of punch in a short amount of time. The premise is centered around three characters: Madame
Flora or Baba, her daughter Monica, and the mute servant boy Toby. Baba is a fake fortune teller,
or so we’re led to believe, and an alcoholic. Toby and Monica are best friends and also in love.
The opera has a few very popular English arias including “Black Swan”, “Monica’s Waltz”, and
“Afraid, am I afraid?” During a faked seance, Baba feels a very real supernatural presence threatening to harm her and takes out her anger and fear on Toby, while Monica tries to comfort her.

Are the ghosts real? Or is Baba simply too far removed from reality to know what’s real anymore? Find out this weekend when The Medium is presented by Moon River Opera! Please see the website or Facebook for more details!