Spooks of the Stage: Ghosts in Opera 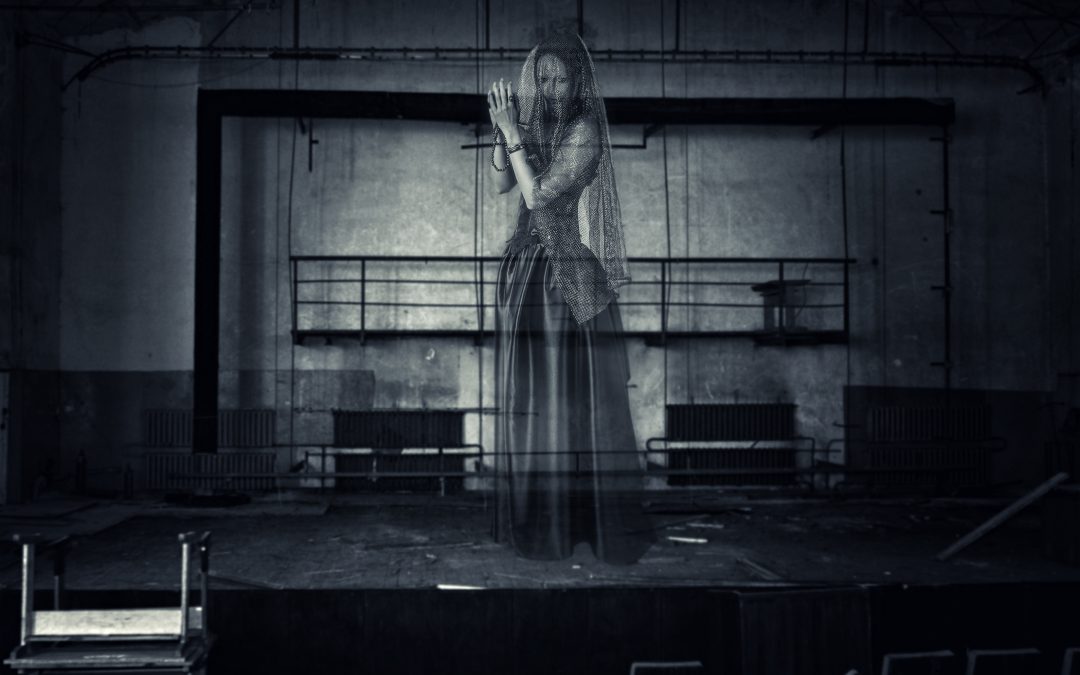 Spending one night in Savannah, GA would lead anyone to many spooks–haunted houses, poltergeists, and demons abound in the hostess city. But did you know the spirits also haunt the opera? Perhaps some of these operas should be on your “to watch” list!

Toshio Hosokawa’s Matsukaze is a modern adaptation of a well-known Noh theatre (a significant form of Japanese theatre) work. The plot is steeped in the supernatural from top to tail, making this first on our list. The two main characters are named Matsukaze and Murasame–two lingering spirits of sisters, bound to the mortal plane by their earthly desires. Both sisters long for their lost lover, an exiled courtier, Middle Counsellor Ariwara no Yukihira. Their songs and voices reflect the sounds of the pine forest where they haunt; they continue to search for the fulfillment offered in a poem their lover wrote:

Today is the hour of parting

The gates of the capital are waiting for me

Yet when I hear your longing

However, the ghost story here doesn’t end in more tragedy for the spirits. Instead, it is a story of salvation. The sisters are freed from their torment in a dance, able to move on and let go of their earthly attachments finally.

The Commendatore in Don Giovanni is arguably the most famous of the Ghosts in Opera (Thanks, Amadeus!), and it is a genuinely terrifying concept. Don Giovanni is a character that believes he can kill, beat up, dodge, or outwit anyone or anything that gets in his way–much to the annoyance of the other characters in this opera. Don’t worry, though. His evil deeds eventually catch up to him.

In this scene, Don Giovanni has been given a chance to change, which he promptly refuses–he prefers wine and women. Shortly after this declaration, there is an ominous knock at the door. Opening it, Don Giovanni finds himself confronted the statue of the Commendatore. Don Giovanni had killed the Commendatore early in the opera and had mocked his statue in the garden. Now the statue is alive and is accepting his invitation (“Don Giovanni! A cenar teco m’invitasti” – “Don Giovanni! You invited me to dine with you.”) Don Giovanni mocks the statue once again, refuses any chance of salvation, and is surrounded by a chorus of demons, who carry him down to Hell, screaming in pain.

Making sure to drive the point home, the opera ends with the moral: “Such is the end of the evildoer: the death of a sinner always reflects his life” (Questo è il fin di chi fa mal, e de’ perfidi la morte alla vita è sempre ugual).

The Ghost of Versailles

Much Like Matsukaze, The Ghost of Versailles is driven by the ghostly characters within the plot. The opera is set in an afterlife version of the court of Louis XVI, where Marie Antoinette is understandably a bit upset about being beheaded. She is so upset that she cannot entertain a declaration of love from a young playwright. Luckily, the playwright in question, Beaumarchai,s stages an opera as a way to cheer her up, framing the opera within an opera.

In Marie Antoinette’s aria “They Are Always With Me,” we have a fantastic example of spectral, ghostly singing sounds like to the composer, John Corigliano. With the use of sliding harmonics and cluster chords, the music doesn’t have the stable tonal base we cling to as listeners. Instead, the music is like a liquid backing to the voice, leaving us feeling off balance and waiting to see where we are taken. This ghost music appears and reappears time and time again from the over, reminding us of our framing plot and binding all the stories together.

L’Orfeo and Orpheus in the Underworld

Much of the plot of both of these operas take place in the underworld, following the journey of Orpheus, but these are incredibly different works and handle the topic in contrasting ways.

In Monteverdi’s L’Orfeo, we are hearing works of early opera. These draw heavily on greek and roman theatre works and practices. Even a piece like “Nulla impressa per uom si tenta invano” (Chorus of the Spirits of Hell) may depict the dead suffering in hell. Still, the measured and contained vocal lines are not what we as contemporary listeners would expect coming from hell–even if it is lovely in its own right.

Not all operatic ghosts are full of gloom and doom. Orpheus in the Underworld is an opéra bouffon or a comic opera by a composer named Jacques Offenbach. As a comic opera, it also has an exciting take on the activities the spirits get up to while in hell. Orpheus in the Underworld lampoons the original tale, jabs at previous works like Gluck’s opera Orfeo ed Euridice. In the “Galop infernal,” everything livens up at a party in the underworld as the music becomes a cancan dance. This is the most famous piece in the entirety of the opera, and we watch as all the underworld spirits, demons, and gods throw all care to the wind and “live it up,” so to speak.

Are you interested in hearing opera while you’re visiting Savannah? Want to learn more about our local art scene? (Visit Moon River Opera’s Improv Opera and other exciting offerings!